St Crispin in the Trenches

Winding sinuously through serene countryside, the placid Somme appears untouched by time. This apparent immutability drifts just atop the river’s waters, concealing its role in some of humanity’s darkest days. Dip beneath the surface to consider an excess of lives lost to conflict in close proximity to its flow. In 1415, English archers and men-at-arms overwhelmed the French during the Battle of Agincourt. Greatly outnumbered, the catastrophic slaughter of their adversaries passed into legend as the stream continued to glide along its quiet banks. Five centuries later, these idyllic surroundings served as the backdrop for inconceivable carnage. England and France met once more, now united in combat against the kämpferinnen of imperial Germany. Days of bloodshed turned to weeks and months, leading to the massacre of more than one million men in an unyielding test of attrition. Another hundred years have passed; who can anticipate what further tragedies may yet unfold along the tranquil Somme?

Annabel Mahoney’s St. Crispin in the Trenches draws on historical, temporal, and literary parallels between Agincourt, its presence in Henry V, and the First World War. Mahoney uses poetry, manipulated text, and academic prose to contextualize themes of identity and the spectatorship of loss. Her work keeps the past alive by partnering medievalism with modernity, rendering historical complexities accessible yet heartrending. Just as Shakespeare looked to the past to examine his own era, Mahoney extends this conversation with antiquity to the present—her insights and assertions confirm the playwright’s claim “there is some soul of goodness in things evil, would men observingly distill it out.

For every copy of St. Crispin in the Trenches sold, Another New Calligraphy will donate $1 to Storycatchers, a nonprofit empowering youth in Chicago’s juvenile justice system to confront trauma and tell their personal stories through theatre. 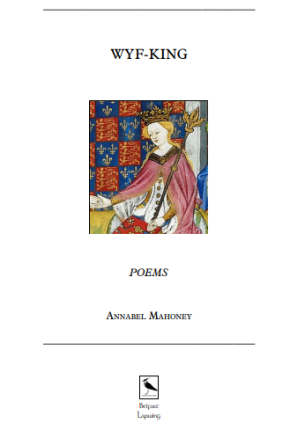 ‘Wyf-King’ is a verse collection in English, Middle English and Anglo-Saxon about the early medieval queens consort and their relationship with power, motherhood and grief.

Each poem contains a translation, a biography and a linguistic gloss.

‘Wyf-King’ is a verse collection in English, Middle English and Anglo-Saxon about the early medieval queens consort and their relationship with power, motherhood and grief. Each poem contains a translation, a biography and a linguistic gloss. (£10 + UK Shipping included)

‘Wyf-King’ is a verse collection in English, Middle English and Anglo-Saxon about the early medieval queens consort and their relationship with power, motherhood and grief. In addition to the translations, biographies and linguistic glosses, this edition contains annotations by the author (£12.50 + UK Shipping included) 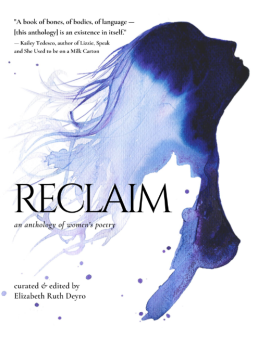 Reclaim: An Anthology of Women’s Poetry

The woman’s body is but one of, if not the most controversial, most anatomized out of all political venues.

The first installment of the series, RECLAIM: An Anthology of Women’s Poetry, is a collection of poems intended to address the need for reclamation of women’s autonomy over their bodies, as a response to their endured oppression as members of a society tainted with capitalist-patriarchal standards.